This is an excerpt from my book.  Order Book 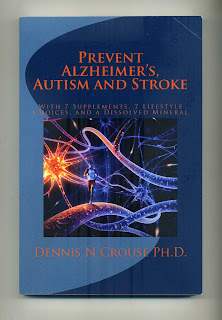 PQQ (a.k.a. pyrroloquinoline quinone) is a molecular super-hero for the body. PQQ is found in mother’s milk at concentrations five times higher than any food. Its’ presence in mother’s milk is no evolutionary accident. PQQ promotes generation of both new mitochondria for brain energy and new neurites for memory storage. PQQ is a heavyweight antioxidant that can deliver 20,000 knockout punches to oxidants compared to only 4 delivered by a lightweight antioxidant like vitamin C.

PQQ was first isolated in 1979, but only a few milligrams could be obtained from natural sources. This low availability prevented PQQ’s chemistry and mode of action from being defined.  In order to obtain larger quantities of PQQ a total organic synthesis from readily available chemicals became a vital part of improving our understanding. My former doctoral thesis advisor, Professor E. J. Corey was awarded a noble prize for developing a logical “retro-synthetic” method of designing synthetic routes to complex molecules. Corey and Alfonso Tramontano performed the first total synthesis of PQQ at Harvard in 1981260.  This synthesis made large amounts of PQQ available for research and has opened our eyes to PQQ’s remarkable properties. PQQ has been claimed to be a vitamin. This claim is controversial as PQQ is produced by our bodies, so for now we will call PQQ a cofactor or coenzyme.

There are six reasons to take PQQ:

·         PQQ protects mitochondria from oxidative stress due to nitric oxide (NO) produced by the brain’s glial cells in response to aluminum.  PQQ lowers NO production by inhibiting the expression of genes responsible for the production of inducible nitric oxide synthase (iNOS)121,261-263. With the help of glutathione PQQ also acts as a stable antioxidant264,265.


·         PQQ increases production of nerve growth factor (NGF) in the mitochondria268 that results in increased neurite growth and improved memory269,270.


·         PQQ when taken before and after a stroke can help to avoid vascular dementia by reducing memory impairment due to lack of oxygen271,272.  Since we don’t know when a stroke might occur, taking PQQ daily is advised.


·         PQQ partially inhibits Aβ oligomer formation from Aβ peptides, one of the hallmarks of AD273.


PQQ inhibits genetic expression of iNOS and thereby inhibits ROS formation in the brain263.  Also oxidized PQQ and reduced PQQ (a.k.a. PQQH2) both exist in the brain as a highly stable redox cycle that protects the brain. The redox cycle works by glutathione first reducing PQQ to PQQH2 and then by PQQH2 reducing ROS and regenerating PQQ264,265.  PQQ’s high stability allows this redox cycle to be repeated 20,000 times before PQQ becomes degraded as opposed to only four cycles for vitamin C264.  The PQQ redox cycle protects the mitochondria, from oxidative stress due to too much or too little oxygen or toxic metals122.


Safety of PQQ Supplementation:  There have been no toxicological signs or symptoms reported as a result of daily PQQ supplementation given orally to humans at a dose of 20mg (milligrams, thousandths of a gram) per day264,270.  In a 13 week study of PQQ given orally to rats a no-observed-adverse-effect-level (NOAEL) of 100mg per kilogram body weight per day was observed275.    Experiments with mice showed no interaction with DNA (i.e. genotoxicity)276.  High daily doses of PPQ in excess of 60mg/day should be avoided due to the potential of kidney damage as observed in rats exposed to high doses of PQQ264.


PQQ Bioavailability and Sources:  PQQ is biosynthesized by the human body at a rate of 100-400 ng/day (100-400 billionths of a gram per day) with an estimated tissue concentration of 1-3 ng/gr of body weight (5-15nM)269.  Oral supplementation of 20 mg of PQQ in humans resulted in a PQQ serum peak of 9nM after each dose in 2-3 hours and a half-life in the serum of 3-5 hours269.  Ingested PQQ is both metabolized and reacts with proteins in humans resulting in only 0.1% being eliminated in the urine as PQQ.  PQQ is a natural product found in human breastmilk and some foods277-279.

*Note: Currently PQQ is not listed as an ingredient in any baby formula


PQQ and Autism:  Biochemical characteristics of autism include activation of iNOS in glial brain cells with increased ROS production280.  This is a neuro-inflammatory process leading to local cell damage, synapse destruction, and brain under-connectivity280.  PQQ prevents this situation by both decreasing the expression of iNOS and chemically reducing ROS. PQQ also prevents brain under-connectivity by enhancing nerve growth factor (NGF) production that in turn stimulates the growth of neuronal connections.    It is therefore not surprising that PQQ is found in mother’s milk at a concentration 5 times higher than found in any other food279.  However PQQ is not found as an ingredient in any currently available baby formula. Since an amount of PQQ equivalent to 160 nanograms per gram of mother’s milk is inexpensive, there is no reason to continue the practice of not adding it to baby formula.

PQQ as an Oral Supplement for Reversing Brain Ageing

PQQ stimulates neurite growth in the ageing brain.  A neurite is a projection grown from the cell body of a neuron resulting in an axion or dendrite that can extend a considerable distance in the brain in order to make a synaptic contact with another neuron’s neurite.  The process of neurite growth involves each neuron growing hundreds of neurites resulting in a complex neural network that allows the brain to store and process memory.  Neurite growth is stimulated by neural growth factor (NGF), a protein made in the brain.  NGF induces tau and MAP protein production that promotes microtubule assembly during neurite growth.  When NGF is removed from neurons, neurites disappear, microtubule mass decreases, and tau and MAP proteins decline to lower levels281.  Neurite growth is important for short to long term memory conversion, brain plasticity, and for damage repair due to stroke.


PQQ stimulates both neurite growth and mitochondrial biogenesis. CoQ10 improves the energy efficiency of mitochondria. PQQ taken together with CoQ10 improves cognition in the ageing brain.  A study of how oral supplements of PQQ and CoQ10 enhance cognition involving 75 people who were 53 years old was recently conducted and published in Japan270.  In the 12 week study 1/3 of the group were given 20mg/day of PQQ at breakfast, 1/3 were given 20mg/day of PQQ and 300mg/day of CoQ10 at breakfast, and 1/3 were a control given a placebo.  People taking just PQQ and PQQ plus CoQ10 significantly out-performed the control group on the CogHealth test.  The group on PQQ plus CoQ10 significantly out-performed both the PQQ and control groups on the Stroop test.

PQQ administered to mouse astroglial cells induces the production of NGF by the astroglial cell282.  Astroglial cells are star shaped and are located at synapses.  Astroglial cells produce extracellular signaling chemicals that remove excess potassium ions, and control the flow of chemicals from the blood to the brain.  Astroglial cells form a membrane called the glial limitans that regulates the movement of molecules, such as PQQ, from the blood into the brain.  This membrane forms what is called the blood-brain barrier.  Like PQQ the methyl ester of PQQ (2-carbomethoxy-pyrroloquinoline quinone) induces NGF production in cells from the CA1 region of the hippocampus283.  This methyl ester of PQQ has low toxicity and is believed to more readily cross the blood-brain barrier than PQQ.  Unlike PQQ, the methyl ester of PQQ is not yet commercially available or approved as an oral supplement.
270. link to paper https://www.semanticscholar.org/paper/Effects-of-Oral-Supplementation-with-Quinone-on-and-Nakano-Yamamoto/902514c5ee790aa6922e45ee3df5418a8e2c97dc