I have just published my third book “Increasing IQ, Cognition and COVID-19 Cure Rate with Essential Nutrients”.  The book is now available as a softcover or Kindle e-book at Amazon. IQ of children born after World War II interests me as it had been rising until it began taking a nosedive in seven countries during the 70’s. My interest in finding out why this “brain drain” was happening came full circle with what I had researched in the 70’s and resulted in my new book. Brain drain is primarily due to environmental chemicals and viruses that impact both brain development, lowering IQ in the very young and killing neurons causing cognitive decline and Alzheimer’s in aging adults. These brain drainers are summarized in my new book.

Philippe Grandjean in his book “Only One Chance” asked the following question: “Could science develop some kind of antidote to counteract brain drain?”  The answer to Grandjean’s question is YES antidotes to counteract brain drainers have now been identified, tested, and are described in my new book. Essential nutrients as brain savers are identified that are scientifically based and tested antidotes to counteract brain drain in children and adults. Two brain savers are identified in my book and described anecdotally as detoxing brain drainers causing attention deficit hyperactivity disorder (ADHD), autism spectrum disorder (ASD), and seizures in children. Also, the “Crouse Protocol” is described that uses essential nutrients as brain savers and nootropics to reverse mild cognitive impairment (MCI) and possibly prolong and save the lives of those with Alzheimer’s disease, such as my mother.

While writing my new book during 2020 it was discovered that SARS-CoV-2, the virus responsible for the COVID-19 pandemic, was a brain drainer. Also, while writing this book it was discovered that three brain savers not only target the detox of brain drainers but also enhance the immune system. These three over-the-counter essential nutrients as brain savers have been shown during 2020 to make humans more likely to be cured and survive the COVID-19 pandemic.

I hope you find my new book useful and as interesting to read as it was to write. 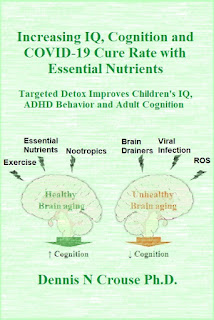 It is safe to drink bottled OSA rich water and beer. For a list of waters and beers see appendices I and II. It is also safe to drink handcrafted Silicade made by neutralizing a sodium silicate produced by PQ Corporation and sold online that is 99.5% water soluble (see appendix III). This product is sold by PQ Corporation directly and distributed through Brenntag to many U.S. community water departments that add it to public drinking water. In addition to being a brain saver, OSA provides corrosion protection. This PQ Corporation product meets the ANSI standard specification set by the American Water Works Association (AWWA) for silicates added to drinking water, as it contains only a 0.5% water insoluble impurity222.

OSA is commonly found in rivers, lakes, aquifers, and drinking waters around the world140. Dissolved OSA from soluble silicates added to drinking water in the U.S. is identical to dissolved OSA in beer and mineral waters140,232.  The amount of OSA in drinking water varies widely depending upon the source140.  In the U.S. 160ppm of dissolved silicates as OSA are generally recognized as safe (i.e., GRAS) in drinking water by the FDA221. The adequate intake of water per day is 3 liters for men and 2.3 liters for women. This level of water intake corresponds to a maximum safe level of OSA intake per day of 480mg for men and 368mg for women. Therefore, drinking 4 cups (approximately 1 liter) of OSA rich water each day containing 50 to 150mg per liter of OSA is well below the GRAS level for dissolved silicates.

It is safe to ingest dissolved silicates, such as OSA, at concentrations well below the saturation level (i.e., less than 200ppm of OSA) in order to ensure that they will not become supersaturated and crystallize in the kidney lumen. Ingesting OSA above the saturation level (i.e., 200ppm) can result in kidney stones (a.k.a. nephrolithiasis) in dogs but almost never in humans. There is one report of kidney stones resulting from too much silicate salt, erroneously labeled as silica (SiO2), used as an inactive ingredient (a.k.a. excipient) in several over-the-counter drugs such as Uncaria Tomentosa, Digestive Advantage, and FlexProtein supplements507.

by Dennis N Crouse The book will be published in Jan 2021 and will be available on Amazon.