Halloween Scares Me to Death Because of Aluminum

Halloween Scares Me to Death Because of Aluminum


I remember when the scariest thing on my doorstep at Halloween was a child in a monster or alien costume.  Now I find the scariest thing to be the bags of chocolate and brightly colored candy that are clutched in the hands of small children on my doorstep.  My fear stems from aluminum in both chocolate and the food dyes used for candy.  This aluminum is a neurotoxin that will continue to kill neurons in these children’s brains long after Halloween.  Aluminum has been linked to autism in children and should not be allowed in candy.  Cocoa trees are the source of chocolate. Cocoa trees prefer a clay soil that is rich in aluminum.  This results in 84 samples of chocolate from different sources containing from 170 to 4,260 mcg of aluminum per ounce.


The following table taken from my book “Prevent Alzheimer’s, Autism, and Stroke” shows how much aluminum is in food and candy.

AFC stands for artificial food colorant * Assumes no alumina extender and 2 atoms of aluminum per molecule of colorant, except 3 for Yellow 5, and assumes a mixture of 4 colors to be approximately 10% aluminum.


At the beginning of the 20th century a number of synthetic dyes and pigments became available.  They were synthesized from bituminous coal and were called “coal-tar dyes”.  These dyes were less costly to produce and superior in color when compared with natural dyes available at the time.   In the U.S. only seven of these synthetic dyes were initially approved for food under the U.S. Pure Food and Drug Act of 1906. These dyes are in general soluble in water.  In order to add color to candy and prevent the color from “bleeding”, the aluminum salts of these dyes are used as an “Aluminum Lake” in the candy.


Currently some manufacturers of candy are promising to remove aluminum from candy in the future but for now both chocolate and colored candy is neurotoxic and should not be given to children.  For Halloween this year my wife and I are giving the children on our doorstep rubber spiders and erasers that are too big to swallow.

An Aluminum Free Cake for My Mother's 90th Birthday

A Cake for My Mother’s 90th Birthday 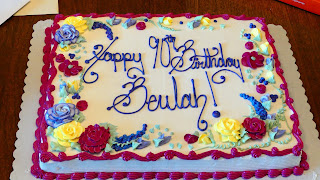 My mother has been suffering from short term memory loss for 4 years.  For the last two years she has followed the recommendations in my book “Prevent Alzheimer’s, Autism, and Stroke” including eliminating all major sources of aluminum from her diet and drinking 3 to 4 cups of Fiji water a day in order to lower her accumulation and increase her excretion of aluminum. Following these recommendations has stopped her declining short term memory loss and stabilized her cognition.

As my mother’s 90th birthday approached I needed to order a decorated vanilla birthday cake that was aluminum free.  Three possible sources of aluminum in a birthday cake are baking powder, food color dyes, and the aluminum baking pan. Calling most of the bake shops in the area revealed that most of them made their standard cakes with baking powder containing alum.  However I finally found Sarah at Iced Bakery who was a baker in town willing to make a custom aluminum-free birthday cake for my mother.
Baking Powder

History of Baking Powder
The first scientist to make the observation that alum in bread is a health problem is the English epidemiologist Dr. James Snow, M.D.  In 1857 Dr. Snow published an article in a British medical journal, “The Lancet”, pointing out that the incidence of rickets in children is higher in London than in towns north and west of London. Rickets in children and osteomalacia in adults is due to a lack of sufficient calcium and phosphate for bone strength and vitamin D for calcium absorption. With the help of a chemist, by the name of Dr. Arthur Hill Hassall, Dr. Snow had found that baker’s bread made in London contained alum while homemade bread made in towns north and west of London contained no alum. Dr. Snow suggested that aluminum complexed with phosphate preventing the absorption of phosphate in the gut required for strong bones. It took 128 years for research to fully explain why aluminum can cause rickets and osteomalacia. In early 1980s J.A. Roberston, et al. (1983), W.G. Goodman, et al. (1984), and G.L. Klein, et al. (1985) found in rats, dogs, and humans that aluminum inhibits the biosynthesis of the active form of vitamin D that is required for calcium absorption.  More recently it has been discovered that neurotoxic forms of aluminum, such as alum, also cause a wide variety of neurologic diseases, such as Alzheimer’s, autism, and stroke.

The Royal Baking Company of Fort Wayne, Indiana was organized in 1873 and through extensive advertising and branding became the premier manufacturer of baking powder in the U.S during the late 1800s.  Their baking powder was made from cream of tartar (a by-product of wine production) and baking soda (a.k.a. sodium bicarbonate).  The recipe was developed by Brothers Joseph and Cornelius Hoagland and pharmacist William Ziegler. Their business grew and was moved to New York in 1890 to become the largest producer of baking powder in the U.S.  In 1889 William M. Wright with the help of chemist George Campbell Rew developed double acting baking soda made with baking soda and two acids, monocalcium phosphate and alum (sodium aluminum sulfate).  This mixture was less expensive than using cream of tartar and the baking powder was advertised as releasing carbon dioxide over a wider temperature range. They marketed their product under the name Calumet Baking Powder. In 1928 the firm was sold to General Foods and it became the largest producer of baking powder in the U.S.

The popularity of alum containing baking powder is in spite of health warnings by dietary experts and a bitter metallic flavor that is experienced by approximately 30% of those who eat the resulting bake-goods. In 1897 eight years after alum containing double acting baking powder was developed, N.Y. University Professor of Clinical Medicine, W. Gilman Thompson, M.D. warned in his book “Practical Dietetics” that “Baking Powder … should be free from alum …”.  In spite of warnings and research showing aluminum is a neurotoxin, double acting baking powder is still recommended today in popular books on baking such as James Peterson’s “Baking” published in 2009.

Many artificial food color dyes (AFCs) contain the aluminum salt of the colorant and in some cases colorants are combined with alumina (a.k.a. aluminum oxide).  The total amount of AFCs added to food per person in the U.S. rose 5-fold from 1950 (12mg/person/day) to 2012 (62mg/person/day). On average 10% of aluminum containing AFCs is aluminum.

Although Sarah agreed to make an aluminum free cake for my mother, she did not realize until reading the ingredients that her colorants for the icing contained “Aluminum Lakes”.  Manufacturers of AFCs are required to list aluminum salts of colorants as “Aluminum Lake” on the package.  In order to eliminate aluminum and still color the icing on my mother’s cake I agreed to send Sarah a set of pink, blue, and yellow natural food dyes made by ColorKitchen.  These natural dyes use beet juice extract for pink, an extract of blue-green algae (a.k.a. spirulina) for blue, and turmeric extract for yellow.  These natural dyes do not contain aluminum but look just as good as AFCs that do contain aluminum.

At the beginning of the 20th century a number of synthetic dyes and pigments became available.  They were synthesized from bituminous coal and were called “coal-tar dyes”.  These dyes were less costly to produce and superior in color when compared with natural dyes available at the time.   In the U.S. only seven of these synthetic dyes were initially approved for food under the U.S. Pure Food and Drug Act of 1906. These dyes are in general soluble in water but not soluble in fats and oils. In order to add color to icing used on cakes, the aluminum salts of these dyes are used as an “Aluminum Lake” in the icing.  The Lakes are not soluble, but are dispersible in the icing. In general Lakes are more stable than natural dyes.  In addition to cake icing these “Aluminum Lake” dyes are used for coated tablets, candies and chewing gums, lipsticks, soaps, shampoos, and talcs.

Acidic and/or fluoride containing cake mix, baking powder, and water used to prepare the cake mix will corrode the aluminum baking pan releasing neurotoxic aluminum ions into the cake during baking.  The easiest way to eliminate this source of aluminum is to use a stainless steel baking pan.  There are also thin plastic sheet liners for baking pans that will withstand baking temperatures up to 400 degrees Fahrenheit. These disposable liners, made of PET (a.k.a. polyethylene terephthalate, PTL, PETE, CPET), not only allow baking in an aluminum pan without adding aluminum to the cake but also make cleanup easier. Likewise the use of an aluminum baking pan lined with parchment paper will prevent aluminum corrosion from adding neurotoxic aluminum ions to the cake.
History of Aluminum Cookware

At the 1901 Pan-American Exposition in Buffalo, New York, aluminum cookware was first introduced to housewives, who wisely viewed it with suspicion because of concerns about the quality of the cookware and the toxicity of aluminum. It took approximately 50 years before aluminum pots and pans gained acceptance. Because it is lighter and less costly than the alternatives, currently aluminum is the most common cookware on the market.

With Sarah’s help as the baker, I can give my mother a beautiful custom aluminum-free birthday cake for her 90th birthday party.

From the historical data presented here it is evident that this custom aluminum-free cake would have been the standard cake in the late 1800’s.  Since 1900 aluminum containing double acting baking powder, “Aluminum Lake” containing artificial food dyes, and aluminum baking pans have become popular.  All of these add aluminum to cakes that we currently consider the new standard cake. This aluminum contamination extends to all commercial baked goods, such as bread, muffins, cupcakes, pancakes, waffles, and biscuits.

The fact that aluminum containing double acting baking powder, “Aluminum Lake” artificial food dyes, and aluminum cookware all became popular in the early 1900’s explains why Alzheimer’s and autism are modern diseases  first observed in the early 1900’s.  It is time that consumers demand aluminum free food, including bake-goods, for our brain health and the brain health of our family. For more details on how to eliminate aluminum from your body and your diet, please read my book entitled “Prevent Alzheimer’s, Autism, and Stroke With 7 Supplements, 7 Lifestyle Choices, and a Dissolved Mineral”.

For more information about sources of Aluminum view the video my wife and I made on YouTube titled:
Brain Fitness in the Aluminum Age - Eliminating Aluminum.  https://www.youtube.com/watch?v=Gt5gfKxpHZU&t=2s
Posted by Dennis N. Crouse at 9:00 AM