Arsenic Detox Using the Selenium Method (8/20/2019)
Arsenic (As) is an element found in the earth’s crust. Over 100 million people are exposed daily to toxic levels (greater than 50ppb) of arsenic in their drinking water1. There are two oxidized inorganic forms of arsenic that are both toxic: arsenite (As2O3) and arsenate (As2O5). Arsenite is 50 times more toxic that arsenate. Some organic metabolites of arsenite and arsenate, such as monomethylarsonate (MMA) and dimethylarsinate (DMA) are considered non-toxic. Arsenite’s toxicity primarily stems from its ability to inactivate up to 200 enzymes, some of which are involved with cellular energy pathways and DNA replication and repair1.
Arsenic enters the body primarily by being ingested, but can also be inhaled or absorbed through the skin1. The primary source of arsenic in the U.S. and worldwide is drinking water1. The urinary excretion of arsenic after ingesting a single 500mcg dose of arsenic as arsenite, DMA, or MMA has been studied as a function of time in human volunteers.   Excretion rate of arsenite was much slower than either DMA or MMA. After 4 days 46% of arsenite, 75% of DMA, and 78% of MMA had been excreted in the urine2.
Once ingested and absorbed by the body, arsenite is metabolized and excreted in the urine as 1/3 MMA and 2/3 DMA2.  Since both MMA and DMA have a shorter half-life in the body than arsenite and both MMA and DMA are considered non-toxic, any agent that facilitates the metabolism of arsenite to MMA and DMA will both detoxify arsenite3 and facilitate its elimination by urination2.
In 2006 it was shown that urinary selenium levels correlate with urinary arsenic levels in a study of 93 pregnant women3. In a prior study with adults, levels of DMA in the urine correlated positively with levels of selenium in the urine4.  In 2019 a case-control study of preschool children found that higher blood plasma selenium levels were associated with a higher percentage of DMA in their urine5. All of these human studies demonstrate that optimal selenium status helps to detoxify arsenic by conversion to DMA and thereby facilitate its elimination by urination. But even more importantly high plasma selenium has been found to lower the risk of developmental delay in pre-school children exposed to arsenic 5.
Supplements for Arsenic Detox
Maintaining high plasma selenium is best achieved with a daily seleneomethionine supplement because of its longer half-life (252 days) in the body than inorganic forms of selenium, such as selenite (102 days)6. Selenomethionine is also 50% to 100% more bioavailable than inorganic forms of selenium, such as selenite (SeO32-)6. In a study of 28 people (13 men and 15 women) taking 200mcg of selenomethionine daily for 2 years it was found after 9 months men had increased their plasma selenium by 60% and women by 102% as shown in Figure 17. 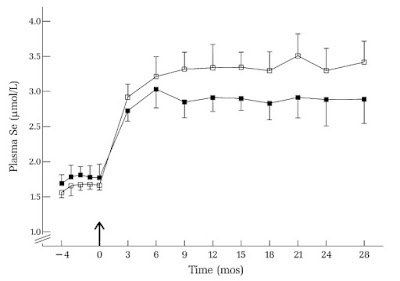 Selenium in Food for Arsenic Detox
The amount of selenium in food depends upon both the type of food crop and where the crop is grown.  For instance lentils can contain high levels of selenium depending upon where they are grown (see Table 2)28,29.  The problem with using selenium in food for detox is the wide variability of selenium concentration in the food unless it is grown in soil that is naturally highly enriched with selenium or fertilized with selenium.  In the case of lentils the variability in selenium concentration is from 22mcg/kg in Syrian lentils to 672mcg/kg in Saskatchewan (SK) lentils28,29. Unfortunately it is difficult to purchase SK lentils because the location where they are grown is usually not indicted on the package.

Brazil nuts have been found to have high levels of selenomethionine, selenothionine, and selenocystine30. However, the problem with selenium variability in food is even worse with Brazil nuts than lentils.  In a random sample of 20 Brazil nuts it has been found that the selenium concentration varied from 0.816mcg/gr to 1390mcg/gr31. Since the mean weight of a single Brazil nut is 4 grams, it is possible by eating just one Brazil nut to either exceed the upper tolerable selenium intake level for adults (400mcg/day - see Table 1) by 1400% or consume only 0.8% of the upper tolerable selenium intake level for adults32.  This variability in selenium concentration makes Brazil nuts an unreliable daily selenium supplement. The variability of selenium in SK lentils is less than in Brazil nuts, making SK lentils a more reliable daily selenium supplement.
Selenium in Fertilizer for Arsenic Detox
Although crops take selenium from the soil and thereby slowly deplete the soil of selenium, in general no effort is made to replace or enhance the soil by fertilization with selenium.  Due to extremely low selenium intake (25mcg/day) by the people of Finland in the 1970’s, the government made a decision to require selenium crop fertilization. Starting in 1984 Finland became the first county in the world to use sodium selenate as a fertilizer ingredient for food crops33. Currently all crop fertilizers used in Finland contain 15mg of selenium per kilogram. Unfortunately Finland is still the only country to implement this country-wide measure33.

After implementation of this program selenium concentration in spring cereals has increased 15-fold and the mean increase of selenium in beef, pork, and milk has increased 6-, 2-, and 3-fold, respectively. This has resulted in the mean human plasma selenium concentration of the Finish people increasing from almost deficiency (0.9mM/L) to normal selenium status (1.4 mM/L)33.
Although the normal range of plasma selenium in adults is 0.9 to 1.9mmol/L (see Figure 1), levels of selenium above 1.9mmole/L have been found to provide protection from arsenic toxicity. Levels of plasma selenium greater than 1.9mmole/L have been found to lower the risk of both arsenic-related developmental delay in pre-school children5 and arsenic-related premalignant skin lesions in adults17. Therefore in order to see less developmental delay and less cancer, Finland’s 15mg/kg selenium addition to fertilizers should be more than doubled in order to increase the Finish population’s mean human plasma selenium concentration to 2mmole/L.
Selenium in SK Lentils for Arsenic Detox

The total selenium in Saskatchewan (SK) lentils ranges from 425 to 673mcg/kg and 86-95% of this selenium is selenomethionine with 5-14% selenate and a very small amount of selenocysteine29,34.  In 2012 the use of a selenium rich lentil diet to prevent arsenic toxicity was proposed35. This proposal was first tested in 2013 with two groups of rats drinking 40ppm arsenic water that were fed either high-selenium SK lentils or low-selenium U.S.A. (US) lentils.  The rats fed on SK lentils had significantly higher urinary and fecal arsenic excretion than did the rats fed on US lentils36.  In 2016 a similar study with mice drinking 200ppm arsenic in water and eating SK lentils concluded that a diet of SK lentils will prevent arsenic-triggered atherosclerosis37.

Lentils are a staple of the diet in Bangladesh where 45 million people are routinely drinking arsenic laden water. Soils in the Ganga-Nrahmaputra delta region of Bangladesh are naturally deficient in selenium35. This deficiency leads to crops and food that is deficient in selenium resulting in lower than normal plasma selenium levels in those eating only locally grown food.

Would there be less pathology due to arsenic toxicity, if the people of Bangladesh ate SK lentils? In 2016 it was proposed to study two groups of 200 people each in Bangladesh with one group eating SK lentils and the other eating US lentils. It was also proposed that arsenic would be measured in the urine38.  The results were published in 2019 and the group eating SK lentils had significantly increased excretion of the urinary arsenic metabolite DMA at 6 months compared to the control group who ate lentils with low selenium content39.  The group eating SK lentils also had less respiratory disease (e.g. asthma and allergies) than the control group39. This is the first human study showing that eating high selenium food can increase arsenic excretion and improve health in the presence of continued arsenic exposure.
Acute Arsenic Toxicity
When exposed to a large dose of arsenic during a relatively short time period you should seek immediate medical assistance.  The best indicator of recent ingestion (1-2 days) is the concentration of arsenic in the urine1.
(GS)2AsSe- Excretion in Some Mammals
The data presented so far in this description of the “Arsenic Detox Using the Selenium Method” is based primarily upon human data.  But there is data from studies involving some mammals that may be relevant to humans.  Selenium (Se) reacts with arsenic (As) and glutathione (GS) and then facilitates the elimination of arsenic as a seleno-bis(glutathionyl) arsinium ion [(GS)2AsSe-] in the bile and feces of rabbits40-42, rats43, and hamsters44.
When sodium selenite or sodium selenate is mixed with arsenite in the required presence of glutathione and erythrocytes, (GS)2AsSe- is produced in rabbits and excreted by the liver into the bile and ultimately excreted in the feces40-42.   It was observed in rats that the administration of selenite significantly increased the amount of arsenic in rat bile43.  Thirty minutes after hamsters were injected with selenite and arsenite these metals were found to be concentrated as (GS)2AsSe- in the liver, gall bladder, and small intestine44.
These experiments all involved sodium selenite or sodium selenate injection in non-human mammals and none of these experiments looked at the ratio and amounts of arsenic excreted in the urine as MMA and DMA versus arsenic excreted in the feces as (GS)2AsSe-.