High levels of Aluminum found in brains of people with Autism


In late November of 2017 a paper was accepted in Journal of Trace Elements in Medicine and Biology that reports extremely high levels of aluminum accumulation in the brains of those diagnosed with autism.  This work was performed by researchers at Keele University in Statffordshire and King’s College in London and was directed by Dr. Christopher Exley.  I am proud to say that Dr. Exley fact-checked my book prior to publication. Now he has reported for the first time a solid link between aluminum accumulation and autism.


The main observation of this new work is that aluminum does cross the blood-brain-barrier at a higher than normal rate and accumulates in the brains of those with autism.  The brains of all 5 autistic individuals tested had at least one brain tissue with pathologically-significant content of aluminum.  In the brains of some individuals with autism the levels of aluminum were found to be the highest ever recorded.    Aluminum accumulation was observed inside both neuron and non-neuronal cells across all brain tissues studied.  With aluminum being cytotoxic its accumulation in these cells is unlikely to be benign.


This new work strongly supports the contention that aluminum accumulation in the brain is a causal factor of autism.  Therefore avoiding aluminum ingestion, spacing out aluminum containing vaccinations, taking a vitamin D supplement, and drinking silica water to eliminate aluminum from your body and your child’s body is recommended for autism prevention as described in my book. 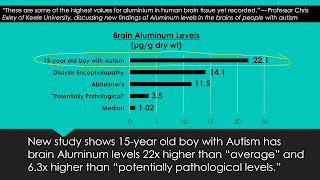