Targeted Mercury Detox Using the Selenium Method (1/5/2020)
Mercury can be inhaled as mercury vapor, absorbed in the gut from ingested food and water, or injected in the body by vaccinations. Common sources of mercury include amalgam fillings, fish, and vaccines containing Thimerosal.  Mercury’s toxicity primarily stems from its ability to tightly bind with the essential element selenium and thereby lower available selenium levels in the body creating a selenium deficiency1.
Selenium is used in some enzymes to protect us from oxidative effects of toxic metals commonly found in the body such as aluminum, manganese, nickel, lead, cadmium, and mercury. Selenoenzymes are involved in reducing the oxidative effects of these metals by reducing the amount of reactive oxygen species (ROS) induced by these metals in the body.  ROS causes damage to our bodies by weakening and killing mitochondria and the cells powered by these mitochondria.
Mercury is particularly toxic because it creates selenium deficiency, inhibits selenoenzymes, and induces ROS formation.  The resulting ROS kills mitochondria because mercury prevents selenoenzymes from providing protection from ROS. Selenium supplementation provides four levels of protection from mercury:
1)      Prevents mercury induced selenium deficiency in the brain2,3
2)      Prevents mercury induced mitochondrial death and neurotoxicity in the brain due to ROS2,3,4
3)      Facilitates mercury detoxification by urinary excretion of mercury5
4)      Facilitates mercury detoxification by formation of inert mercury selenide (HgSe)1
Targeted Detox during Chronic Mercury Exposure
It has been demonstrated that targeted detox of humans being chronically exposed to mercury is possible by taking 100mcg of selenomethionine daily for twelve weeks. The group being supplemented with selenomethionine had significantly enhanced urinary excretion of mercury5. In those with mercury induced selenium deficiency it may take on average 2 - 4 weeks to first restore the body’s selenium reserves before enhanced mercury excretion is observed (Figure 1) 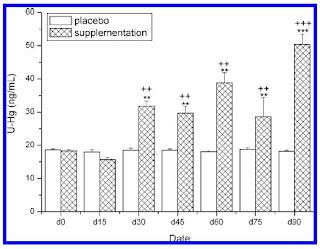 Mercury and/or selenium deficiency also causes a number of additional symptoms not seen in hypothyroidism:
·         Physical Tremors32
·         Seizures33
·         Impaired Language Skills34-37
·         Impaired Psychomotor Functions34-37
·         IQ Loss in Children37,38
·         Mild Cognitive Impairment in Adults33,34
Outcomes associated with prenatal mercury exposure include the loss of IQ points, and decreased performance on tests, including memory, attention, language skills, visuospatial cognition and psychomotor fuctions34,35. Outcomes associated with prenatal selenium deficiency also include both impaired language skills and psychomotor function36,37.
Non-Targeted Detox after Acute Mercury Exposure
When acutely exposed to a large dose of mercury during a relatively short time period you should seek immediate medical assistance.  Severe acute elemental mercury exposure has been managed by a combination of selenium and N-acetylcysteine (NAC)41,42.  There are also chelators available by prescription that will remove some mercury after acute exposure. Unlike selenium that binds and detoxifies mercury irreversibly, chelators reversibly bind and redistribute mercury in the body without detoxification.  Some of this chelated mercury is eliminated in the urine and bile, while some mercury is redistributed to the brain. For this reason chelators should only be used cautiously under a doctor’s supervision.
Pharmaceutical Chelators for Acute Mercury Exposure
There are 11 pharmaceuticals that chelate metals approved by the U.S. FDA, although only one of them (e.g. BAL) has been approved for treating acute mercury toxicity43.  Unlike selenomethionine, the natural form of selenium that humans ingest primarily from plants, pharmaceutical chelators are non-natural manmade chemicals. Because of safety concerns, pharmaceutical chelators can’t be recommended for routine use. The pharmaceutical chelators are dithiols and do not contain selenium. Since these dithiols reversibly bind to both essential and toxic divalent cations they can both transport these ions to other organs and facilitate their elimination44. For instance in some cases they have been found to chelate selenium45. The following is a list of four pharmaceutical chelators with the first two being FDA approved with the third being used without approval:
·         Dimercaprol (a.k.a. British Anti-Lewisite, BAL) used by injection for mercury toxicity
·         Dimercaptosuccinic acid (a.k.a. Succiner, DMSA) used orally for lead toxicity
·         Dimercaptopropane sulfonate (a.k.a. DMPS) used for mercury toxicity46.
·         N,N’,-bis(2-mercaptoethyl)isophthalamide (a.k.a. BDET, BDTH2, OSR#1, NBMI)
The last compound on the list, also called “Boyd Haley’s compound”, is not approved by the U.S. FDA for use as a pharmaceutical chelator and has been taken off the market as a supplement because it is non-natural. The FDA concluded in 2008 that this compound had inadequate safety testing and therefore may “present a significant or unreasonable risk of illness or injury”47.